Kilkenny mixed the good with the not so good to win by 0-14 to 1-10 in their Allianz Hurling League Division 1 clash with Cork. While Kilkenny were dominant in the first half after which they led by eight points, Cork came storming back into the game in the second half and looked like at least securing a share of the spoils until Richie Hogan landed a late free to decide this game at Nowlan Park.

Free-taker Pat Horgan was Cork’s only scorer in the first half as they trailed by 0-10 to 0-02 at half-time. Cork were the better side after the interval and after JJ Delaney’s dismissal, looked like at least securing a share of the spoils but Richie Hogan’s late point secured a win for the Cats, who are second in the Division 1 table behind Galway on scoring difference.

Hogan registered ten points for his side for the second week in a row, hitting five frees and a single ’65 from placed ball in addition to four points from play. John Mulhall, Michael Rice, Michael Fennelly and Eddie Brennan were Kilkenny’s other scorers.Pat Horgan landed six frees for Cork, who also had points from Niall McCarthy, Ben O’Connor and substitute Cian McCarthy

While Pat Horgan opened the scoring for wind-backed Cork from a third-minute free, it quickly became apparent that Kilkenny were playing at a higher level. Their striking was crisper than Cork’s, they were aggressive in defence and attack and played at an intensity that Cork failed to match for much of the first half. Richie Hogan hit two points to move Kilkenny ahead by the 12th minute and with their side dominant Hogan, Mulhall and Rice moved the Cats clear eight points to one by the half-hour mark.

Jackie Tyrrell and Tommy Walsh were excellent in the Kilkenny defence, giving the Cork forwards little space and time on the ball.  Pat Horgan pointed a free in the closing minutes of the half, but Michel Fennelly intercepted a Cork pass and moved the margin to eight points at the interval. 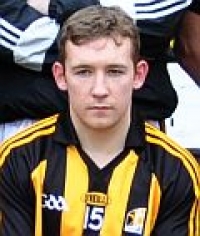 Cork,struck for a  Ben O’Connor  point from play, two minutes into the second half, before Richie Hogan swung over his eighth point.Two minutes later Kilkenny had their best goal chance of the game when it took a top-class save from goalkeeper Martin Coleman to deny Colin Fennelly a goal. Eddie Brennan also had a goal ruled out for a foul on defender Eoin Cadogan. From this point Kilkenny seemed to lose their way and Cork hit five points over a nine-minute period, with substitutes Jerry O’Connor, Cian McCarthy and Tom Kenny making an impact. The scores came from Horgan (0-2), Niall McCarthy (0-2) and Cian McCarthy.

The pressure was now on Kilkenny and they suffered a further setback when full-back JJ Delaney was sent off for his second yellow card in the 63rd minute.

Cork suddenly sensed they could get something out of the game and with two minutes left Paudie O’Sullivan was brought down by substitute James ‘Cha’ Fitzpatrick for a penalty, which Horgan drilled low to the net to level the game Cork 1-9 Kilkenny 0-12. It set up a grandstand finish as Horgan for Cork and Hogan for Kilkenny exchanged pointed frees. Cork’s Niall McCarthy and a chance to put his side ahead but was put under pressure and his shot went wide of the Kilkenny posts.The final chance fell to the Cats In the last minute of the game when Tom Kenny fouled Richie Hogan and the Danesfort man  stepped up to point the free and secure the win.