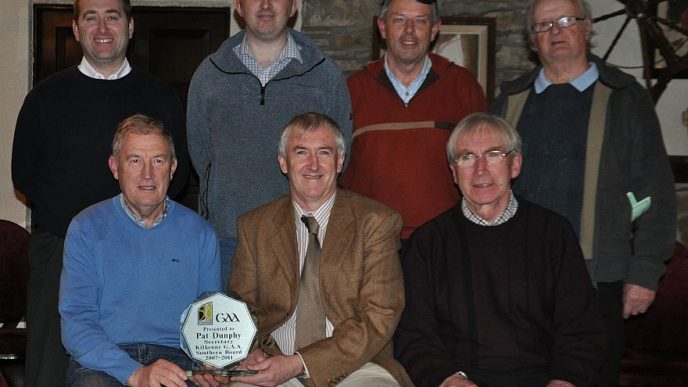 The 2011 GAA Southern Board Convention was held at The Rising Sun, Mullinavat, Co. Kilkenny on 5 December last. 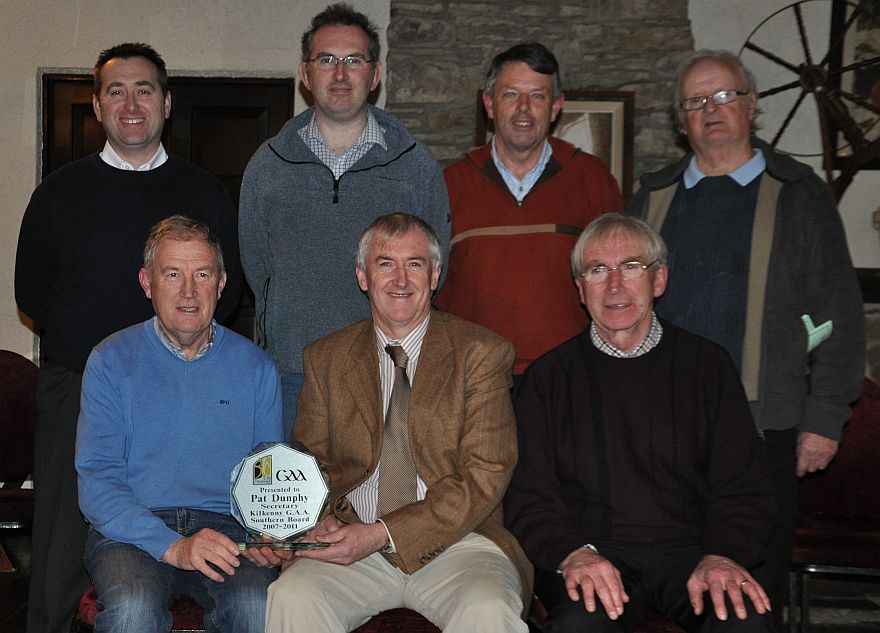 The meeting was opened by Chairman Dan Kenny (Piltown) and the Officer Board and delegates from all 16 Southern Clubs were joined by Ned Quinn, Barry Hickey, Jimmy Walsh and John Healy from the County Board, Leinster and Central Council. Apologies were received from Paul Kinsella and Pat Dunphy who were obliged to be elsewhere on the night.

While the meeting had the usual formalities and functionality it was book-ended by the retirement of outgoing Southern Board Secretary Pat Dunphy. Pat had served the full five year term and is obliged by rule to stand down.

The minutes of the 2010 convention, printed in the booklet, were read and adopted.

Pat Dunphy then gave his Secretary’s report. In it he thanked all those who have helped him carry out his functions in the previous five years as well as the year just gone. He congratulated all participating teams in this years competitions and congratulated the winners. He noted the huge number of games involved and the successful restructuring of the Junior Championship which had happened this year. He pondered if all other competitions might go this way in the future and praised the new shield competition for under 21 adopted at last years convention. He highlighted a number of issues which are perennial problems for the Board – re-grading, fixtures calendar and postponements. Most of his report though consisted of thanking everybody involved whose co-operation and help he had relied on during the five years of his tenure including club secretaries and PRO’s, team managements, other boards, groundskeepers, referees and his fellow board members. He finished by stating how much he had enjoyed his time and spoke about the rivalry on the field but also the friendship off it and he thanked anyone who made his job easier with advice or assistance over the years.

Andy Aylward gave his Treasurer’s report. Since everything was in order, laid out in the convention booklet and there were no questions it was the briefest of reports – for which he received high praise.

Dave Gallagher gave a PRO report. He thanked his fellow officers Chairman Dan Kenny and Secretary Pat Dunphy for all their help during the year. He also thanked the sponsors Iverk Produce, JJ Kavanagh & Sons and Countrystyle foods for their sponsorship, GK Print for the production of the programmes and booklet and the club PRO’s who supply the information. He gave a special mention to Charlie Maher (Photographer) and Barrie Henriques who does so many match reports and gets them published in the Southern Scene part of the Kilkenny People.

The Chairman then gave his address. In many ways he covered the same ground as the Secretary’s report and other reports while highlighting the issues that he could see arising. He began ‘as gaeilge’ and spoke for a number of minutes before reverting to English for the bulk of his address. His first point of praise was for all the Officers but particularly Pat Dunphy who has been brilliant over 5 years. He praised clubs, officials, referees and players who all played their part in the smooth running of the competitions, as well as cooperation from other boards. He spoke about the changes to the Junior and Under 21 competitions and the re-instatement and success of the JJ Kavanagh sponsored O’Farrell Cup and he praised all involved. Naturally he congratulated all winners of the various competitions held under the remit of the South Board and suggested that we should never rest on our laurels after a good year but consolidate and improve. He congratulated Brian Cody and the Kilkenny hurlers on their success which brought great pride to the County – and encouraged the children of the county to play! He thanked the County Board Officers, referees and officials for their part in the organising of games. He mentioned our three great sponsors Iverk produce, Countrystyle Foods and JJ Kavanagh & Sons and the vital role that they play in allowing the Board to function efficiently. He singled out two people Jim Conway and his Mullinavat club, who have always been available and helpful and a former delegate the late Cepta Brennan (RIP). Finally he once again thanked Pat Dunphy and the other members of the board before reminding delegates that there will have to be further changes to the Board next year when other five year terms are up.

This was followed by the election of Officers – a very straightforward routine this year since there was only one nomination per position. (Re) Elected were Chair – Dan Kenny (Piltown), Vice-Chair Jim Kearns (Shamrocks), new Secretary Paul Long (Kilmacow), who had been brought in as Assistant Secretary earlier, Assistant Secretary Pat Dunphy (Carrigeen), Treasurer Andy Aylward (Mullinavat), PRO Dave Gallagher (Shamrocks), and assistant PRO Seamus Reade (Thomastown).

All County Board Officers present were invited to speak and they each spoke in praise of the diligence and hard work of Pat Dunphy as well as highlighting issues which arose during the year or may arise in the coming year. Ned Quinn spoke about Pat’s efficiency and integrity, the proposed development at Dunmore, the issue of emigration and fundraising as well as the All-Ireland victory. Barry Hickey praised the Board and thanked Pat Dunphy in particular for his help during the year. He spoke about the general standing of Kilkenny financially – which is reasonably good but will need minding. John Healy complemented the Officers and addressed the strategic Plans which clubs need to get working on. Finally Jimmy Walsh, with tongue slightly in cheek, welcomed Pat Dunphy to a small but elite band of former Southern Secretary’s. He also addressed PR and IT issues, including emails and websites.

Two motions/recommendations were discussed at length, relating to issues that arose during the year and a decision was made to forward them to the County convention for discussion.

A few issues arose under AOB – taking care of dressing room facilities if there is a harsh winter, the possibility of a County Under 21 Shield and Players’ injury insurance.

Chairman Dan Kenny then closed the meeting but not before a special presentation was made to Pat Dunphy (Carrigeen), the outgoing Secretary. The presentation was made by the Treasurer Andy Aylward and all those present stood in for photographs to commemorate the occasion of his retirement.