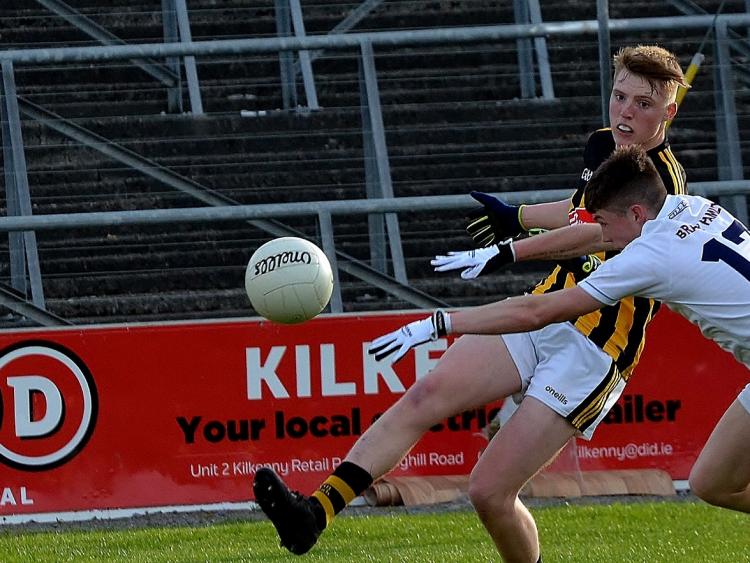 Kilkenny’s Jack McNamara gets the ball away as Jack Keogh moves in Picture: Willie Dempsey

Goalie Jack Conway was the star when Kilkenny finished their commitments in the Leinster minor football championship by turning in a respectable performance against unbeaten Kildare in Nowlan Park yesterday evening.

Conway brought off three top class saves, including one from a penalty at the finish, to keep the Lilywhites at bay. His first big stop was just on half time from Fiachra Galvin, and he then reacted smartly to deprive star attacker, Oisin Milmoe, who was following up when the ball ran loose.

The Mooncoin custodian made a super diving save from James Dalton on 56 minute before he stopped a penalty effort from Aaron Brennan virtually on the call of time.

Kildare, who had already qualified for the semi-finals on June 22, fielded only two players from the side that won the last round against Louth.

Kilkenny were trying to recovery from a 38 point lashing by Wicklow, and in fairness, they did well. Of course Kildare kicked wide after wide, 18 in all, including 12 during the opening half.

The winners looked the smarter outfit from the start. However, they couldn’t finish.

The only Kildare attacker who could find the posts during the opening period was Oisin Milmoe, who scored 1-4 (one free) of the team’s first half total of 1-5.

Kilkenny nabbed three points during that half and they led for a short period after Ryan O’Grady pointed a free in the 21st minute (0-3 to 0-2).

Within seconds Milmoe kicked an equaliser before he smashed home a goal in the 24th minute. Kildare nearly nicked a second goal on the whistle through Fiachra Galvin, but goalie Jack Conway saved well.

The winners opened the second half with a point from Dan Woulfe after 18 seconds, but the expected landside of scores never followed.