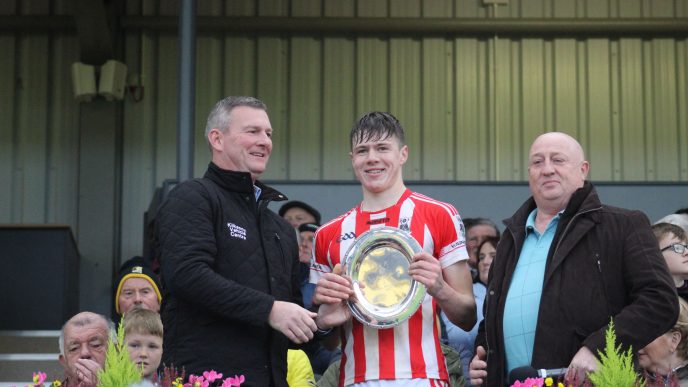 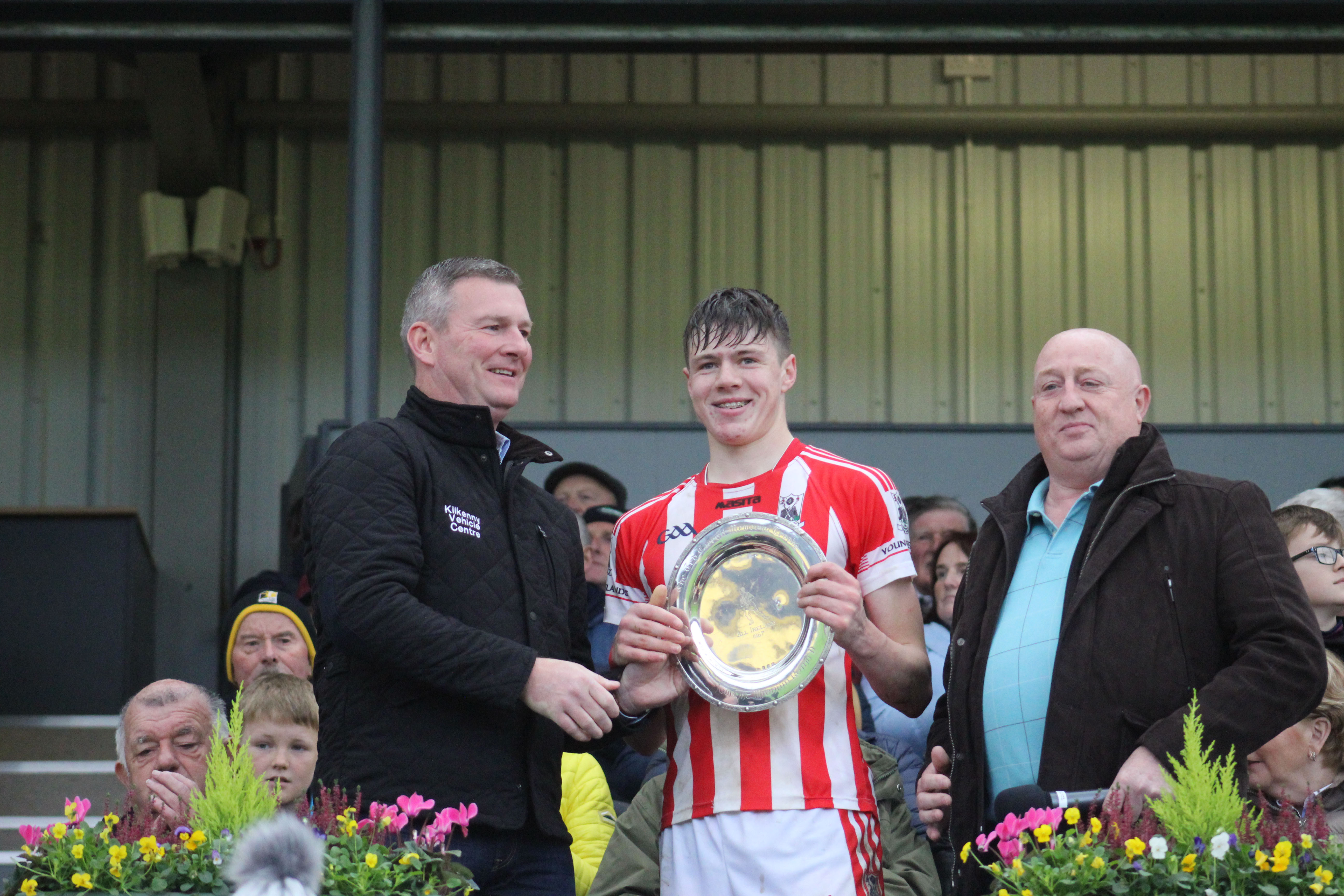 In the end a goal from Killian Carey in the 45th minute and a point from a 54th minute free by Patrick Brennan earned ’Irelands what was their first Roinn B championship title at this level.

Young Irelands got off to a flying start, scoring 1-1 during the opening two minutes. Patrick Brennan shot the point before Conor Fitzpatrick gathered a ball on the ‘50’ and raced straight through before shooting to the net.

They weren’t finished at that. On three minutes Killian Carey converted a free to leave ’Irelands 1-2 to no score ahead.

St Martin’s got off the scoring mark in the fourth minute when Jack Farrell chased an apparent nothing situation when the ball appeared to be running wide. However, Farrell rescued the situation and made a goal out of nothing.

The revival was short lived. When Killian Carey got a run at the Martin’s goal in the 13th minute he plundered a good goal to shoot his side 2-4 to 1-1 ahead.

’Irelands missed a chance of a goal a minute later when they drove a penalty wide. While they hurled well afterwards to lead by 2-6 to 1-5 at half-time, they might easily have been further ahead.

St Martin’s tore into action in the new half and after Jack Farrell pulled back a point they drew level when Thomas Lawlor got the ball home from close range in the 41st minute (2-6 each).

The game was a blaze of sustained action from there to the finish, with Martin’s on top for a while. Young Irelands slowly but surely got a grip on things again, and Carey’s goal lifted them.

The winners shot three wides in-a-row before Patrick Brennan converted a free after shooting two others wide early. ’Irelands were under pressure to the finish, but they held out for a great victory.

Dicksboro top of the A grade in Kilkenny minor hurlingDICKSBORO 0-18, MOONCOIN 0-6

Dicksboro were leaders from start to finish when they won their 11th Kilkenny minor hurling Roinn A championship final at Nowlan Park when beating Mooncoin in a repeat of the 2018 decider.

The winners got off to a flying start when lively corner-forward, Sean Maher, grabbed a brace of points during the opening minutes. Oisin Henebery hit back for Mooncoin from a free, but the winners took up the running again and they were within sight of victory when they hit half-time leading by 0-11 to 0-3.

That was after the winners shot 10 wides, although the shooting of Liam Moore (5), Sean Maher (2) and Mikey Clifford (2) went a long way towards making up a decent score.

Little changed during the third quarter when the wind gained in force as it backed Mooncoin. Turning into the final quarter the gap was still eight points (0-13 to 0-5), but from there on the ‘Boro dominated the scoring, with Moore, Maher and Clifford all finding the target again.

The bad weather over the weekend left the pitch heavy and demanding, and the quality of hurling suffered as a result. Dicksboro had the edge in quality, with Padraic Moylan, Liam Moore, Mikey Clifford and Sean Maher their top performers.