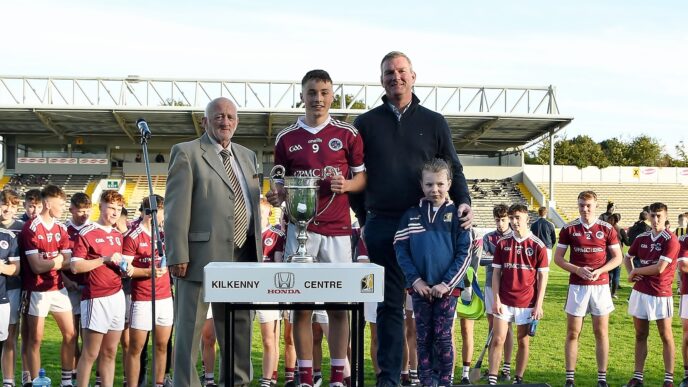 St Patrick’s & Tullogher Rosbercon clashed in the Duggan Steel Roinn B Hurling final that flipped destinations on several occasions before after extra time St Patrick’s were left standing at the end of 80 odd absorbing minutes of hurling.
The key man on show was Josh Dowling for St Patrick’s who scored all his sides five points in extra time, four from frees as the northern side deserved the spoils in extra time but Tullogher Rosbercon were very much the team during normal time & can count themselves unlucky to have held on for a famous win.
Barry Furlong got his side off to a flyer with a fine point before Dowling landed a hat trick of points which was met by a Sean Hanrahan point who plucked the breaking ball to point.
Tadgh Butler & Evan Nealis increased the lead further until Tullogher struck for goal.
Joss Connor & Furlong exchanged passes before the latter sent the green flag waving with a thunder bolt of a shot.
Kieran Bergin settled St Patrick’s with a fine minor in response before Dowling split the posts with one of own.
Furlong landed a point from distance to see Tullogher only one behind at the break 1-3 to 0-7.
The third quarter belonged to the men in stripes as Hanrahan pointed upon resumption before Furlong found Kyle Bolger and the nippy corner forward sent the green flag waving.
Furlong nearly had another goal only for an inspirational save from Eoin Healy.
Hanrahan converted a free before Dowling brought St Patrick’s back into the game with two quick fire points before himself & Dowling swapped frees.
It was down to the minimum when Dowling pointed again but Tullogher started to get back on top with points being grabbed by Sean Walsh & Michael Sydney.
Dowling had the Saints level when he won a soft free but there was nothing soft about the resulting ‘21 with the towering full forward blasting the ball home. He put them ahead in the 54th minute but Hanrahan levelled matters in the 57th minute to bring the game to extra time.
In first half extra time Dowling had the say landing four points as the heavens opened up whilst Tullogher responded through Furlong & Hanrahan.
Dowling landed a free upon the resumption with Michael Sullivan landing a monster score. The second period of extra seemed to go by in a whirl as Tullogher poured forward but couldn’t create the opening to get the score to win the match.
Tullogher should be really proud of being in two finals in 24 hours but saying they have being unlucky is scant consolation.
To the victors go the soils and it’ll be great to see St Patrick’s back mixing it up at Roinn A level in 2022.

U-13 A1
Young Irelands 4-10 2-7 Graigue Ballycallan
Young Ireland’s Gowran completed the league and championship double at MW Hire Dunmore on Sunday morning.
Playing into a stiff breeze Young Irelands got a tonic start with goals from aidan keating and Tomas Carroll in the 5th and 12th minutes gave them a 2 – 4 to 0 – 2 lead by the first water break.
Two minutes into the second quarter David Brennan raised another green flag to put them further ahead, Great hurling by Michael Tynan at centre back drove GBC  forward and Ben McEvoy was fouled with Cormac Neary slotting home the resulting penalty. Two minutes later McEvoy rose another green flag to leave the score at half time 3 – 5 to 2 -3.
The third quarter was very even with Young Irelands in front 3 – 7 to 2 – 6 after 45 minutes.
The steady hurling of  the wind assisted Young Irelands with Keelan Barcoe and Jonathan Dunne prominent led to points from Kieran Carter, Aidan Keating and Joseph Langton before a crossfield ball from Dunne ended up in the net for the winners fourth goal.

Two excellent teams with Young Irelands having the edge throughout the match as they deserved their hard fought win.