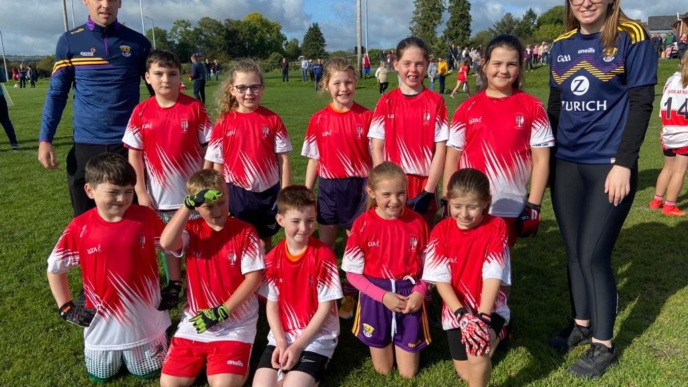 Barrow Rangers & Mullinavat clashed in the Duggan Steel U-13 Roinn C Hurling final at sunny Pairc Seamroga where the old adage – goals win matches proved to be true where a well drilled Paulstown outfit had the sharper eye in front of goal.
After 5 minutes play Barrow Rangers held the lead 0-2 to 0-1 thanks to Jack Bolger & Jake Barcoe whilst the ‘Vat response came from Adam Fitzpatrick.
Tom Carpenter seemed to get the vital touch for the opening goal for Rangers after a booming clearance from Cian O’Reilly who tagged on a pointed free soon after.
Cian Kelly landed a free from distance but a Bolger point left Rangers 1-4 to 0-2 ahead at the water break.
The second quarter saw Jack McShane rifle a goal to the back of the net. The rest of the quarter was tight with Fitzpatrick & Bolger swapping frees to see the difference stretch out to eight points 2-5 to 0-3 at the break.
Again Barrow Rangers started the quarter with a goal from Cathal Fanning after O’Reilly fired a long onto the edge of square.
O’Reilly tagged on a point soon after. Lesser teams may have folded in the circumstances but these young men from Mullinavat showed real determination to pull themselves back into the game with Fitzpatrick & Kelly sharing the next four points between themselves. Fitzpatrick was beginning to look dangerous & was through on goal only to be fouled. He popped over the resulting free. Try as they might they simply couldn’t breach the defence rearguard action of Jack Keating, Tadgh O’Connor & O’Reilly.
Bolger’s two late pointed frees ensured the trophy was going to the side clad in blue & white but one had to be impressed at the level of skill on display for a Roinn C final.

Meanwhile there was two U-15 games down for decision this weekend. In the Duggan Steel Roinn B Championship quarter final Dunnamaggin showed their class with early goals to get a commanding win over St Patrick’s 3-10 to 0-9. In Roinn C Fenians gained the final berth with a comprehensive win over Dicksboro.

Railyard GFC honoured two past stalwarts of the club when the hosted their annual local leagues with the U13s playing for the Patrick Dowd Cup while the U10s competed for the Joe Walsh Cup. The U8s were also in action as they played for The Parish Cup.

Joe Walsh was one of the founder members of the Club and captained the team that won their first senior title in 1951. He was also secretary for over 25 years.

The late Patrick Dowd was a proud member of the Club after he retired from playing he went on to coach a number of the club’s underage teams with great success, both the Dowd and Walsh families continue to work for and support the club.

12 teams made up of members of Railyard men’s and ladies clubs competed for the 3 cups on offer with over 150 children taking part. The day started with a parade for all the competing teams lead by members of the Athy Pipe Band.

After 12 games of close competitive football the following teams ran out winners.

U-8 Parish Cup: The Bulls coached by Ian O’Keefe and Breda Mulcahy

Railyard would like to thank everyone who helped out with the day.