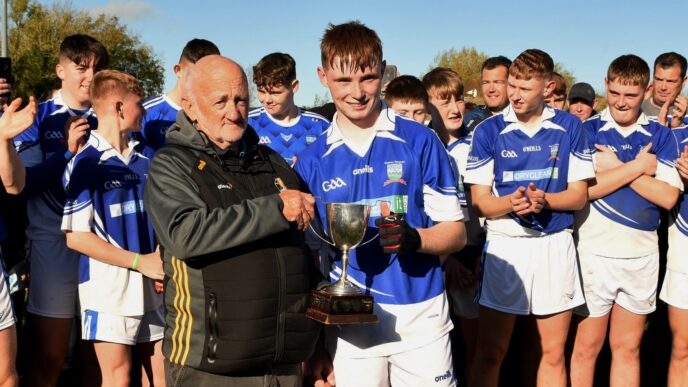 SHARE
Click below for a report on Bord na nÓg activity by board PRO Pado Flynn for the last week.
Minor C Final
Barrow Rangers 2-11 1-11 Graignamangh
Saturday morning proved dry & sunny and with no wind, itprovided perfect conditions for the conclusion to this Kilkenny Honda Centre Minor C Championship.

With no wind and the low Autumn sun at right angles to the pitch, there was no advantage in playing either way with the Paulstown lads playing the 1st half into the northside goal

Barrow Rangers had done some reshuffling of the forward line with No.13 Charlie Mullins starting in full forward.

Rangers had the first opportunity to open the scoring with Joe Healy putting a ball wide in what was a nervy start for both teams. However after 4 mins, Graig won a free on the half forward line which was pointed by Sean Hamilton.

It took about 7 mins of mainly scrappy play before we saw Paulstown register their first score with Cathal Purcell putting over a point from play.

9 minutes in and Rangers Charlie Mullins struck a ball in the direction of the Graig goal which was diverted out of play by full back Fintan Gahan. Joe Healy stepped up and pointed the subsequent 65 making it 2 points to 1 in the Rangers favour.

Graigs left wing forward Steven Kinsella had an opportunity to level the game but his shot tailed wide. However the strong running right wing forward Conor Byrne fared better when he got his chance and notched up a great point from play.

Not to be outdone the Rangers forward Niall Carpenter scored an equally fine point from the corner.

Graig worked the ball upfield from their puckout and centre forward Colin Hamilton played the ball into full forward Ted Dunne who was being tightly marked by Rangers Paul Delaney since the start of the game.

At this stage of the game it looked as is Graig were gaining an upper hand on the game as Sean Hamilton proved his scoring eye was in with a 65 and a 70-yard free going over the bar to give Graiguenamangh a lead of 4 points to Rangers 3 points heading into the 1st water break.

The two main talking points of the 1st quarter was the contest between Graigs centre back Ivan Bolger who had made some great clearances and strong runs into midfield contrasted with Ranger’s centre forward Joe Healys speed and nice stickwork. The other talking point was that it was very evident that Rangers had come with a plan to handle Graigs marquee full forward Ted Dunne.

The restart of the game after the 1st water break saw some changes to the Barrow forward line with Dylan Hunsten now moving into the full forward position as they looked for a key to unlock the Graig backs. It could have been Graig who recorded the 1st goal as Ranger’s keeper Jack Doyle had to leave his line to commit to a challenge leaving his goal openbut he did enough to put the ball out for a 65 which Sean Hamilton converted to give Graiguenamanagh a 2 point leadwhich subsequently proved to be as good as it was going to get for the Graig lads.

The game looked to proceed with the same script as the 1stquarter – Joe Healy and Ivan Bolger continued to battle for supremacy – Ivan making some powerful runs with the ball into midfield – Joe winning his share of ball and getting a nice point.

However Rangers rotation of the forwards paid off when Dylan Hunsten finished off some good work from the forwards and the ball rolled into Bill O’ Shea’s goal to make the score 1-4 to 0-5.

Ted Dunne moved to the half forward line to try and shake off the close marking Rangers backs and to try and impose himself on the game. This resulted in him winning a free which Sean Hamilton converted. This made it a one point game.

Trouble was on the horizon soon for Graig as their full back Fintan Gahan looked to be in bother with a hamstring. Graig management appeared reluctant to take him off and moved him to full forward.

The game was levelled when Graig were awarded a free in midfield which Sean Hamilton put over for a great point.

Ted Dunne continued to enjoy the close attention of the barrow backs who worked well as a unit an made sure that the Graig forward would be chocked for space whenever he got on the ball.

Barrow Rangers were certainly the happier of the 2 sides at half time with the game lead and having limited Graig to scoring just 1 point from play in the entire 1st half.

Graiguenamagh accepted the inevitable and the injured Fintan Gahan was replaced by Jack Brown who moved to wing back and Abhiann Flood moved to Full back.

Less than 5 minutes into the 2nd half and the blue tide began to rise. Paddy Wade in full forward for the 1st time as named on the Match Program pointed after he received a Charlie Mullins ball played in from the wing after a fantastic run. Joe Healy got a brace of points from play, the second from a great catch despite the efforts of his marker. 3 unanswered points from play could only spell trouble for Graiguenamanagh.

The Graig men responded and there was 2 or 3 minutes of sustained pressure on the Barrow goal but the Paulstown backs were up to the task and defended manfully while keeping the Referee satisfied that no fouls were incurred despite their corner back being shown a yellow card.

With the pressure on the Barrow goal relieved, they worked the ball up the field and the Graig Keeper Bill O’ Shea was forced to make a good save from a Dylan Hunston shot.

The final quarter restarted with Barrow Ranger again spinning the forward roulette to switch the line-up whereas Graig remained committed to their No. 14 at full forward. On other days this could have worked but the Barrow Rangers backs were well versed in how to how to handle this threat.

An Ivan Bolger shot went wide which gave Ranger’s keeper Jack Doyle the opportunity to drive the puckout long with Niall Carpenter gathering it and played a great ball into Dylan Hunsten who drove the ball into the Graig goal to give the Rangers man his 2nd goal.

Surely no way back now for Graiguenamanagh.

Graiguenamanagh continued to supply ball into Ted Dunne only for Ted to be smothered by the Rangers backs.

Joe Healy kept the Rangers scoreboard ticking with a point. 7 point game and panic setting in for Graig.

Graig rallied and tried to force a positive outcome with a sustained effort of pressure which resulted in Cian O’ Shea winning a free which Sean Hamilton put over the bar – a goal separates the 2 teams.

Barrow Rangers didn’t do panic and Noah Scully made a great run from the 45 yard line and played the ball into sub Liam Healy who forced a 65. Captain Joe Healy converted the 65 with a great point over the blackspot.

The final passage of play saw Graig win a free on the right wing which Sean Hamilton duly put over. Still 3 points in it.

The barrow keeper took the puck out but its all over. Barrow Rangers are U17 Roinn C County Champions with a winning score of 2-11 to 1-11.

No question that Barrow Rangers were the deserving winners on the day with a well balanced team that included 5 scoring forwards and a well drilled set of backs whereas Graiguenamagh could only register 1-1 from play.

Man of the match on the day came down to the outcome of the battle for supremacy between Joe Healy and Ivan Bolger with the Barrow Rangers man having to get the nod as part of the victorious team.

This win caps a great year for Barrow Rangers with the U13 Roinn C Co Championship to go in the Trophy Cabinet with the Minor win. They also contested the U15 Roinn C County Final but finished 2nd best that day. However as Meatloaf sang Two out of Three Aint Bad!!! 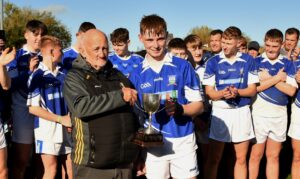