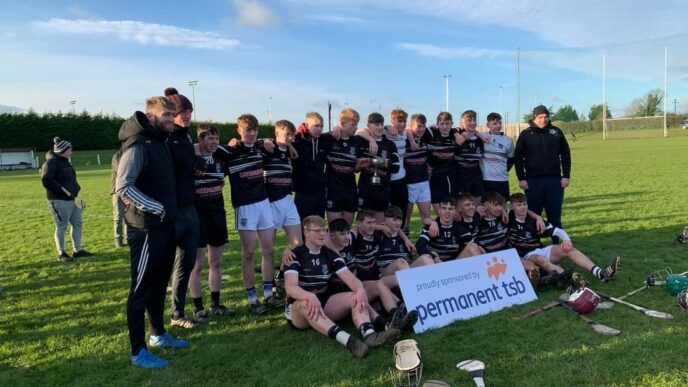 Click below for a U-19 match report for the past week collated by Mary Morgan, Junior Board PRO

The Permanent TSB U-19 Roinn B Championship Shield Final took place on Saturday the 27th November last in sunny but bitterly cold and windy conditions in Thomastown.  Tullogher Rosbercon, with the wind advantage in the first half, were first out of the blocks right from the throw-in with a point from midfielder Coleman O’Sullivan.  Graigue Ballycallan’s Aaron McEvoy responded with a fine point in the second minute.  However, this was the only time the sides would be level as the Tullogher Rosbercon men were on a mission and they controlled the game from start to finish.

Tullogher went on the attack in the third minute and a low ball in from Brian O’Shea troubled the Ballycallan defence.  Sean McGrath eventually cleared the ball out to the wing and a foul by Tullogher took the pressure off momentarily.  That didn’t last long however and in the space of two minutes, the half forward line of Marty Murphy (f), Simon Kennedy and Mikey Handrick (2) had added four points to the Tullogher scoresheet.  A threat by Graigue Ballycallan in the twelfth minute was swiftly dealt with and they settled with a point from a placed ball by captain Oisin Egan.  Simon Kennedy closed out the first quarter with a lovely point and at the first water break Tullogher led by 0-7 to 0-2.

Tullogher’s centre back, Lar Murphy, was outstanding in leading the Tullogher defence and he was also pinpoint accurate when he sent a long range free over the blackspot in the 18th minute.  Immediately the Graigue puckout was won by Brian O’Shea who sent in a dangerous high ball which Sean McGrath could only bat away but Brian Walsh was first to pounce and with the goalmouth crowded, he simply pulled on the ground and found the back of the net.  Brian continued his scoring run shortly after with a pointed free.  Graigue Ballycallan could not break down the Tullogher defence and could only manage two points from frees in the second quarter.  In the closing minutes of the first half, Colman O’Sullivan was instrumental in finding Pat Doyle, whose strike to the bottom corner of the net meant the Ballycallan men had a lot of work to do in the second half if they were to have any chance of lifting the cup.  The halftime score was Tullogher Rosbercon 2-11 Graigue Ballycallan 0-4.

The Tullogher men did not ease off in the second half and continued to apply the pressure.  They were relentless and hunted in packs, winning ball after ball.  They scored the opening three points of the second half, with lovely points from Brian Walsh, Kevin Alyward and Lar Murphy.  Graigue’s Sean Roberts won the puckout following Lar Murphy’s point and looked to be on target with his strike but it flew across the goalmouth and wide.  However, he was rewarded with a hard-earned and well-deserved goal in the 37th minute.  The soft, heavy ground meant a lot of rucks over the course of the 60 minutes and in the 39th minute, Marty Murphy broke free to score a superb point for his side.  Another ruck in the 44th minute saw Brian Walsh emerge with the sliotar facing the opposite direction but with a look over his shoulder, he sent the ball high and over the bar to the delight of the Tullogher supporters.  Graigue’s captain, Oisin Egan, who fought hard all afternoon, closed out the third quarter with a point for the men in blue and white.  At the second water break, Tullogher Rosbercon led 2-16 to 1-6.

Graigue’s Oisin Egan scored three points in quick succession following the water break.  Tullogher went on the attack again but Billy O’Neill defended well and denied Marty Murphy a scoring opportunity.  Another long range free from Lar Murphy found the hand of Marty Murphy but his goal was disallowed, having been deemed a square ball.  However, Marty wasn’t giving up and in the 54th minute, his strike from outfield found the back of the net – there was no question of a square ball this time!  Graigue Ballycallan never gave up and they continued to try get past the Tullogher defence, to no avail.  They settled for one final point from wing back Billy O’Neill.  Tullogher were deserving winners, led by their captain Brian Walsh, Lar Murphy and Coleman O’Sullivan.  Mikey Handrick also deserves a mention for his ability to pop up anywhere on the field to help out his teammates.  Graigue Ballycallan deserve credit for their great sportsmanship and determination to fight to the final whistle.  A special word of mention to their captain Oisin Egan and Billy O’Neill for their hard work.  Fulltime score Tullogher Rosbercon 3-14 Graigue Ballycallan 1-10.

In a competitive game and before a large attendance, Lisdowney lifted the Under 19 C Championship Cup when overcoming Dicksboro B by three points at James Stephens (Larchfield) on Sunday the 28th November 2021.  Lisdowney opened the scoring in the first minute with a point from Charlie Brennan.  Matthew Kelleher opened Dicksboro’s scoring from a placed ball in the third minute.  Aidan Tallis and Matthew Kelleher traded frees while scores from Zac McHardy and Michael Clifford brought the sides to the first water break, with Lisdowney trailing by one point, 0-4 to 0-3.  The game ebbed and flowed throughout and by the 24th minutes, a point from Aidan Tallis saw Lisdowney take the lead, which they never relinquished.  By the half time whistle, Lisdowney had a three point lead, 0-7 to 0-4.

The second half started similar to the first half with both sides getting a point each in the early minutes.  However Lisdowney increased their advantage after three minutes when Aidan Tallis scored a great goal from play.  Lisdowney were hurling well at this stage and by the 42nd minute led by 1-11 to 0-7.  Dicksboro upped their game at this stage and slowly came back into the game.  On the 54th minute Dicksboro trailed by four points when Michael Clifford scored a superb goal to leave just one point between the teams.  Lisdowney added the next two points to leave three between the teams in the last minute when Dicksboro were awarded a free outside the 20m line.  The resultant free puck was saved and Lisdowney held on to a three point winning margin.   Full time score, Lisdowney 1-13 Dicksboro 1-10.

Mullinavat won a first title in the relatively new under 19 grade, courtesy of a four point victory over Barrow Rangers, at a stormy Danesfort on Saturday the 27th November 2021.  An impressive defensive display in the opening half, marshalled by Peter McDonald at centre back, set the Southerners up for eventual victory.

George O’Connor opened the scoring for Mullinavat after five minutes.  The impressive Kieran O’Neill replied with two nice points from play for the Paulstown men by the tenth minute.  At the water break Barrow Rangers led 0-3 to 0-2, George O’Connor (free) and Kieran O’Neill from play, having exchanged scores.

Mullinavat equalised two minutes into the new quarter, with a point from play by the nippy Conor Power.  Barrow Rangers recorded points from firstly a free, and then from play, both by Joe Healy, to put the Northern outfit two ahead by the 20th minutes.  A Mullinavat pointed free by George O’Connor in the 28th minutes left the halftime score :-Mullinavat 0-4; Barrow Rangers 0-5.

Having performed so well against the wind, Mullinavat were the happier of the sides as the new half commenced.  Five minutes, in a good attacking move from the Vegas men, resulted in a CJ Fitzpatrick goal from play.  They now led 1-4 to 0-5.  Further points from Conor Walsh a minute later, and a George O’Connor free after 42 minutes, had Mullinavat 1 -6 to 0-5 clear at the final water break.

George O’Connor from a 65” put Mullinavat five clear 1-7 to 0-5 in the 50th minute.  Barrow Rangers weren’t finished however, and a Joe Healy score from play on 50 minutes, followed by a Conor Hanlon free four minutes later, left just a goal between the sides.  A goal was required, and was soon provided by Paulstown’s best player on the day, Kieran O’Neill, with a rasper of a shot to the top left hand corner of the net.  Mullinavat finished the stronger however, and a George O’Connor point on 56 minutes followed by a Fiachra Knox goal on 60 minutes saw Mullinavat home.

Over the hour Mullinavat deserved their victory, anchored by the defensive work versus the elements in the first 30 minutes.  Paulstown also come out of the game with great credit after a brave second half effort.  This bunch of Mullinavat players have achieved little honours at under 14 to minor grades, but perseverance had finally paid off in this under 19 grade.