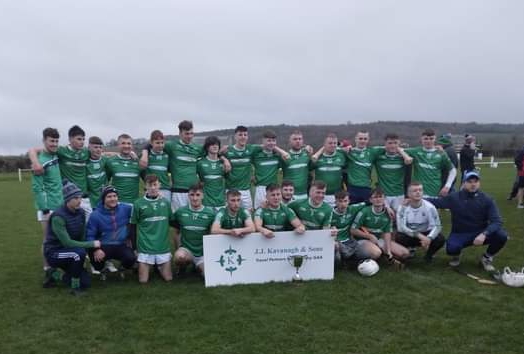 Click below for a match report from the JJ Kavanagh & Sons U21 Roinn E County Final.

Emeralds and Tullaroan were fated to clash the JJ Kavanagh & Sons U-21 County Final on Sunday the 12th December last in Freshford.  Being friends and neighbouring clubs, it was inevitable it was going to go down to the wire.

Going into the first water break, Tullaroan looked home and dry leading by a favourable 9 points.  But a determined and spirited team performance from the Emeralds men from that 16th minute onwards saw them make a comeback to narrow the gap to two points by half time, and go on and win by two points at the full-time whistle.

Tullaroan opened the scoreline in the first minute of the game with a point from a free by Gearoid Dunne.  This was followed with a nice point from play by Emeralds corner forward Alex Burke in the fourth minute.  Tullaroan added to their tally with three successive points, two from play by Tomas Dunne and Bill Walton and another from a free by Gearoid Dunne.  Coming into the 12th minute, saw them three points ahead.  A turning point in this first half was just before the water break, Tullaroan scored two successive goals.  Corner forward Bill Walton broke through for a goal which was quickly followed by another from Gearoid Dunne.  This left the score 2-4 to 0-1 at the waterbreak.

On the scoreboard Emeralds looked under pressure, but despite this they were composed on the field, and after the waterbreak they plugged away and eventually scored in the 24th minute, with a pass from center forward Johnny Doyle to Liam Grant to point.  Centre back Sean Burke caught the next Tullaroan puck out and broke out to pass to Kieran Cleere who finished nicely with a point.  Tomas Dunne answered with a point for Tullaroan.  A nice pass from the hardworking midfielder Killian Doyle found Calvin Ryan which resulted in a point.  Adam Barnaville followed with two points from midfield and another from Calvin Ryan.  The Emeralds side were showing form all over the field.  Again, Sean Burke won a ball around the centre and found Liam Grant running on the wing who placed the ball between the posts.  At this stage Gearoid Dunne scored a nice long range free for Tullaroan to bring them back into the game.  A foul on Keelan Martin in injury time of the first half saw another point for the Emeralds men, who had made a great comeback in this second quarter.  Liam Grant pointed this free to leave just two points between the sides at the half time break.  Half time score Tullaroan 2-5 to Emeralds 0-9.

Just after half time, busy corner forward Darragh Queally pointed.  The Emeralds kept the pressure on with a point from centre forward Johnny Doyle to level the game for the first time in the 35th minute.  Score at the second water break saw a score of 2-6 Tullaroan to 0-12 Emeralds.  Emeralds went ahead with a point from a free awarded for a foul on Alex Burke. Tullaroan were not finished and made a momentary comeback in the 45th minute with a point from a free by Gearoid Dunne to level the match again.  At this stage it was a tantalising game, Emeralds Alex Burke and Calvin Ryan scored a point each to put them two ahead.  With six minutes to go, Tullaroan’s Jack Keogh and Bill Walton scored a point each to narrow the gap.  But it was not enough as the Emeralds backs worked the ball out again and again.  In the final minutes Sean Burke was fouled and half back Kieran Cleere pointed a superb long range free.  After another foul on Adam Barnaville, Kieran Cleere pointed a second free to seal the deal for Emeralds.  Final Score Emeralds 0-16, Tullaroan 2-8.

Best for Tullaroan was Eamon Hollard full back and centre back Joe Coughlan had a strong first half.  In the first quarter Gearoid Dunne and Bill Walton, were the biggest threats, while Tomas Dunne and Keelan Brennan tried hard.  Player of the match was centre back for Emeralds Sean Burke.  He gave an outstanding display of hurling feeding quality ball into the Emeralds forward line throughout the game. He was ably assisted by wing backs Gavin Moriarty and great credit to half back Kieran Cleere for his spirited performance.  Emeralds midfield of Killian Doyle and Adam Barnaville worked hard throughout.  Johnny Doyle gave a solid second half performance at centre forward, while all forwards around him saw the scoreboard with Calvin Ryan impressive and busy corner forwards Darragh Queally and Alex Burke a constant threat.  It was this balance of the spread of players scoring from play and the work rate of their backs & midfield that saw the Emeralds over the line in a what was an all-round team performance.  Captain Ciaran Phelan was presented with the cup by Jack Kavanagh who represented sponsors JJ Kavanagh and Sons.  Ciaran thanked Tullaroan for a good game.  He thanked his own teammates, the team management of Eoin Moriarty, Toddy Moriarty and Shane Pollard, but a special mention was that the team would dedicate this win to their friend the late Martin Burke.