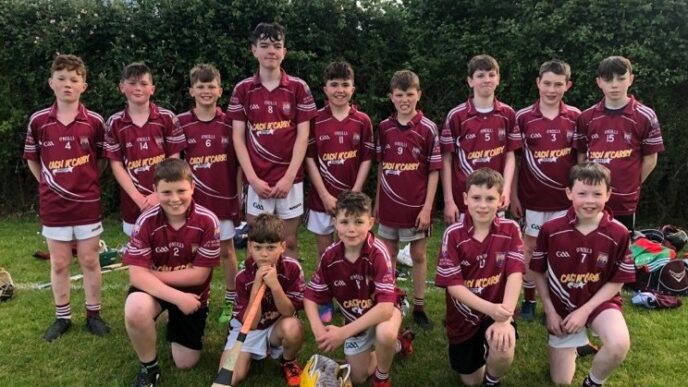 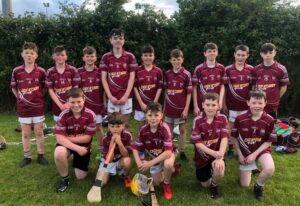 Ballyragget was the venue Friday night as St. Patricks welcomed Naomh Bríd in the next round of their league matches. St. Patricks, having won their previous match versus Cloneen, wanted to continue their winning streak and Naomh Bríd wanted to show their capabilities and get some points on the table.

There was no score in the opening 5 minutes and after 15, three points had been scored two to St. Patricks and one to Naomh Bríd. A couple of attempts at goal by St. Patricks and they were very unlucky not to have gotten one, but Naomh Bríds defence was too strong and all attempts were blocked and cleared swiftly. St. Patricks luck changed in the 22nd minute when Alex Ryan got the ball into the back of the net. Half time score St. Patricks 1-2 Naomh Bríd 0-1 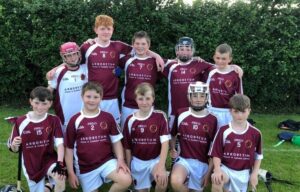 Naomh Bríd started off the second half with a goal attempt of their own, St. Patricks defence blocked every strike. St. Patricks were unlucky not to get a goal of their own as their attempt was curtailed when the referee blew the whistle for a foul.

Naomh Bríd point at 11 minutes of the second half was responded to by a goal by St. Patricks.

After twenty minutes the score stayed at 0-2 to 2-3 for St. Patricks. All credit to Naomh Bríd who showed great determination and were undeterred by the score line. Two minutes later they scored a cracking goal and narrowed the margin bringing them back in to the game. St. Patricks responded with a few points- one from a free, but not long after, Naomh Bríd scored a second goal and were unlucky when a few point opportunities went wide. St. Patricks scored another free just near the end and finished off with a point from their youngest player Harry Phelan before the referee called time ending the match on a score line of St. Patricks 2- 6 to Naomh Bríd 2-3

A lovely well-matched game of hurling. The sun was shining, and the rain stayed away but there was a strong wind throughout making it difficult for both sides to get their point scoring on target.

The low score does not truly reflect the hurling abilities of both sides. Both teams showed great skills and I am sure gained experience from their encounter.

Well done to both teams on a great match and best of luck for the rest of the remaining league campaign.

This was a very tight match from the off with both sides very evenly matched
The rower-inistioge got ahead in the first half with some lovely taken points and with slieverue struggling in front of goal the away team went in at the break 0:4 to 0:2
Slieverue got a great goal at the start of the second half through calum brennan and it seemed to lift the home team as they added another 2 scores through jamie dowling soon after.
The rower-inistioge threw everything at slieverue at the closing stages and were unlucky not to get an equalising goal but the slieverue defence and their excellent goalkeeper Jack Moore held them out
Slieverue held out in the end for a hard fought win
Slieverue 1:4 v Rower-inistioge 0:4

Piltown and O’Loughlins met in Round 8 of the U13A hurling league. O’Loughlins were very strong up the centre with Samuel Briers and Adam Quigley causing problems driving forward and picking off some nice scores. O’Loughlins full forward line was also dangerous with Conor Manogue causing problems with his pace and accuracy. Dylan Walsh and Tom Gahan settled Piltowns defence with some fine blocks and clearances. Piltown stayed in the game with a goal and a few frees from Jack Farrell. Harry Farrell was also causing problems winning a few frees on Kyrell Myintski who played an excellent game at full back.
HT score was Piltown 1-05 O’Loughlins 1-10.
Second half Felix Fwamba and Adam Quigley scored early goals to put O’Loughlins in a comfortable position. Piltowns backs and midfield duo of Driscoll brothers kept working hard, but the O’Loughlins forwards kept tipping over a few points. Daire O’Brien tagged on a few points from frees as Piltown forwards worked hard but frees was the only output from O’Loughlins tight defence.
Credit to Piltown for never giving up against an excellent, strong O’Loughlins outfit.
Piltown continued to chase the game but without the goals they could not close the score difference. Well done to O’Loughlins for running out comprehensive winners in the end.

The OLG boys made the journey to Piltown on Friday evening and they put in a great performance in this round 8 fixture on the league. Piltown played with the wind in the first half but OLG started strongly scoring a great early goal and 4 points in the 1st 10 minutes and conceding 2 points from frees. Piltown had a strong end to the 1st half scoring a goal and 4 points but OLG maintained the lead with some fine points from play and accurate free taking.

OLG had the advantage of the wind in the second half and we made it count. Piltown battled bravely and kept it tight but we got a goal and a point in quick succession and from there our boys didn’t look back. We added a couple of more points from frees and midway through the first half another goal which gave OLG a great cushion. Piltown never gave up and fought all the way through the match and our lads had to work hard and were rewarded with some lovely points from play and right at the final whistle we added our fourth and final goal to give OLG a fine victory. It was well deserved based on the hard work and commitment shown by all the team. Well done OLG and keep it going!

Mullinavat proved too strong for Kilmacow on this occasion. The Mullinavat boys got the perfect start with a quick goal from Adam Fitzpatrick followed by a point from Cian Kelly.    Patrick Quinlan opened the scores for Kilmacow with a point which was then answered by another goal from Adam Fitz 2 01 to a point. Things were even enough for the remainder of the half, David Phelan pointed for Kilmacow and Jamie Cass scored 2 frees. Jamie Fitzpatrick Adam Fitz x2 and a Cian Kelly free left the score 2-05 to 0-04 at the break.
The second half was a bit more 1 sided. Kilmacow failed to score due to some great defending from Odhran Woods, Jim Cantwell, Leo & Patrick Aylward. Cian Kelly (1.03) and Adam Fitz (1.02) supplied the scores for the home side. Notable mention to Zack Fenton who hurled a solid game for Kilmacow and Edward Bolger who impressed for Mullinavat.
A good tough match with a high quality of skill on show.

It was Carlow side Burren Rangers who made the trek to Dr. Tierney Park to play Graignamanagh on a fine but breezy evening.

The home side made the perfect start with two goals from centre forward Padraic Hayden in the first 5 minutes of the game and it was looking like it would be An easy night for the Graig boys.

The visitors settled however, and 10 minutes into the game, some strong running from midfield saw Charlie Salter Bermingham notch up a point and a goal. This gave the Carlow boys confidence and Graignamanagh realised they had a tougher night ahead than the opening minutes suggested. The remaining 20 mins of the 1st half saw Hugo Tierney put over 2 points from play for Graig but there was a sense that half time couldn’t come quick enough for the home side to do some resetting and sure enough in additional time, Seam Dempsey had the ball in the back of the Graig net.

The home team did some reconfiguration at half time and restarted the game positively. This half saw Graig get goals from Padraic Hayden and Gary Kelly but Burren Rangers kept the scoreboard ticking over with a point from wing forward Oran Whelan and 3 points from Charlie Salter Bermingham.

With 10 minutes to play Burren Rangers wing forward Ciaran Redmond scored a point from play to cut the Graig lead to a point and again there was the sense that Graig were working hard to protect a lead. Burren Rangers sensed the panic in the home side and pushed forward in numbers. The inevitable happened and the dying minutes of the game saw Ciaran Redmond grab a brace of goals from goal mouth scrambles. A good lesson to be learned for all to never give up as Burren Rangers didn’t lead the game at any stage until the 61st minute when they overturned a 1 point deficit to take a 5 point victory.

Cloneen found themselves under a lot of pressure for the majority of the opening half.

As the first half drew to a close a lucky goal gave the visitors the spark they needed and Cloneen finished the half the stronger.  Cloneen found it difficult to get good ball into their forwards and the switch of FF to half’s forwards worked and it resulted in HT score Glenmore 4-9 to 2-4 .

The second half took off and even though Cloneen had the wind they failed to really pressure Glenmore. Glenmore kept scoreboard ticking despite Cloneen scoring a goal and they finished comfortable winners .