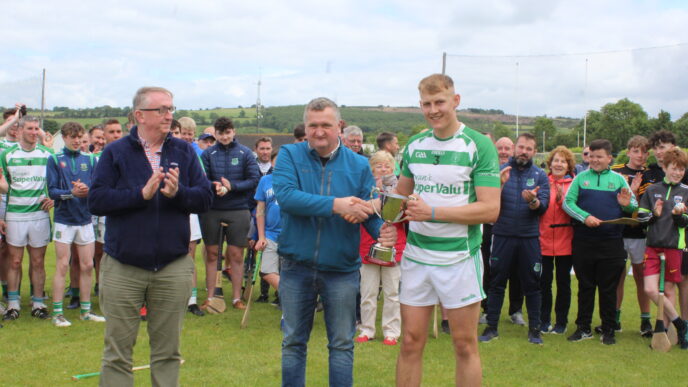 It was quite a windy affair in Páirc na Seamróg last Sunday afternoon, 19th June for the JJ Kavanagh & Sons All County Junior Hurling League Final.  2021 winners, Piltown, would have to overcome Graignamanagh if they were to retain the title.

Piltown, with the wind in the first half, were first to open the scoring when free-taker Ronan Ryan, pointed from a placed ball in the third minute.  Niall Kinsella followed this up with a fine point when he scooped up a breaking ball in the sixth minute.  Less than a minute later, however, Graignamanagh centre, Sean Walsh, winning the puckout, picked out Ted Dunne who cut through the Piltown defence and buried the ball in the back of the net.  Not a minute and a half later and to the delight of the Graig supporters, a pass from Michael Bolger across field to Ted Dunne resulted in his second green flag of the afternoon.

Shell-shocked Piltown recovered and tightened up their defence.  Piltown’s Robbie Tobin was winning many of the Graig puckouts and set up Ian Long for a lovely point in the 13th minute.  He put his name on the scoreboard also when he split the posts in the 19th minute.  In the 21st minute, Graig’s James Meaney, solid at centre back, won a Piltown puckout and quickly off-loaded to Richard Foley.  Richard, keeping the ball low because of the wind, pointed with ease.  A number of converted frees from Ronan Ryan and Pierce Blanchfield kept the scoreboard ticking over and by halftime, only a point separated the sides.  Piltown 0-7, Graignamanagh 2-2.

Graig’s Pierce Blanchfield opened the second half scoring right from throw-in.  The wind was certainly a factor and Piltown used the short puckout to work the ball up the field against the wind.  Points from Sean O’Neill and Billy O’Callaghan meant the sides were level by the 32nd minute.  Graig’s Niall Hayden used the wind to his advantage when he sent the ball high over the bar from long range in the 39th minute and Terry Dreelan added his name to the scoresheet when he broke away from his marker in the 42nd minute.

Another short puckout to Piltown fullback Kevin Walsh was worked up the field until it reached Martin Power.  Martin made no mistake in where the ball would end up and the sides were level again.  Five minutes later, a ball into the corner from Ronan Ryan was scooped up by Martin.  He quickly hand-passed it to Billy O’Callaghan.  Billy was quickly surrounded by a number of Graig defenders but he spotted Aaron Kinsella making a run up the right hand side and Aaron’s strike was unstoppable, finding the back of the net in the 50th minute.

The sides were now fired up as they both saw a win was within their grasp with 10 minutes to go.  Graignamanagh responded with a point from goal scorer, Ted Dunne and two points from Terry Dreelan reduced the deficit to a point with three minutes to go.  Five minutes of injury time were added and the Graig men defended superbly and points from Seamus Kavanagh and Pierce Blanchfield late in injury time secured the win for Graignamanagh.  FT Piltown 1-12, Graignamanagh 2-10.

For Graignamanagh, Ted Dunne, Niall Hayden and Sean Walsh stood out as did Ian Long, Robbie Tobin and Aaron Kinsella for Piltown. 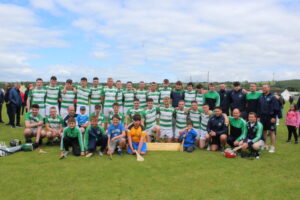