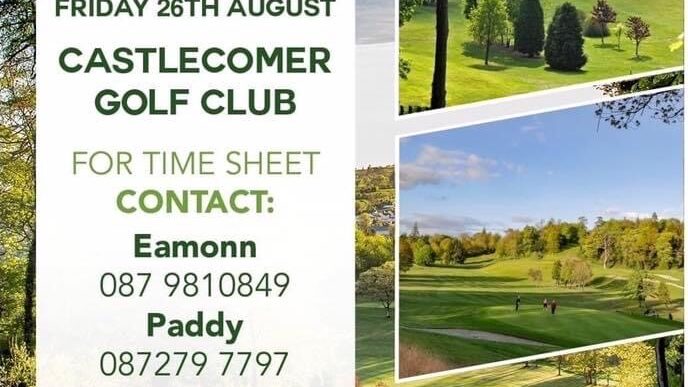 St Martin’s/Muckalee GAA clubs are hosting a golf classic in Castlecomer Golf Club on Friday 26th August. It is a first move for the two clubs and there is great excitement about the social event with most of the tee times already gone.  The sponsorship drive has garnered huge support thus far from the business and farming community but the main sponsors as we go to print are Forde’s Eurospar Castlecomer, Michael Brennan Agri Repairs, Novekom, M&A Coaches Ltd, Hermitage Farms, Brennan Agri Contractors (Knocknadogue), KTL & Danny Quirke Construction.

2022 marks the 40th anniversary of the formation of St Martins Hurling Club. Part of the celebrations will involve the launch of a 10-year development plan for both the football and hurling clubs. This will cover player development, facility development and the needs and wants of the next generation of GAA players within the clubs.

The clubs have approximately 170 children in their underage sections and 7 adult teams.  The Camogie Club and the Ladies Football Club also use the pitches. Along with the gym, there are various exercise and wellbeing classes held in the clubhouse and the walking track around the pitch is in use daily. The schools teams recently won their county finals and the club are looking to nurture these players upwards and at the same time, look after present players, as well as continuing to maintain and upgrade facilities for the good of the community. Significant financial investment is needed annually to keep both pitches open between insurance, maintenance, etc. and they are always striving to help theirplayers excel both on and off the field.

It is hard to believe but in the wink of an eye St Martin’s GAA club is suddenly 40 years old. The club, founded in 1982, has had many highs and many lows in that time like any other country club.

“At present there is a huge buzz across the clubs. It probably started last year with a good run from the Intermediate team and we have been knocking on the door at underage level too. Our U-15’s got the trophy roll going with the winning of the football back in December and the minors followed up in March with the football final at A level followed by the league title and the two Junior teams won or got to league finals whilst our schools teams have won their finals too.  Our Footballers also got back in in the latter stages of this yearschampionship” said Richard O’Shea, Chairman St Martins GAA Club.

“In fairness the ladies of the parish are flying high too having won the football county final last year, Katie Nolan & Carlise Comerford won the Camogie All-Ireland last week, so the ship is very much point up at the moment” added Mr O’Shea

“A development is not just bricks and mortar, or just coaching, it’s also about creating a spirit within the clubs and an ethos that will in time ensure we are back fighting for senior honours in both hurling & football whilst remaining at the heart beat of the community, a fine example of which was the Ronnie’s Relay undertaken by the club in 2020 that raised in excess of €50,000 for Hurling for Cancer, Kilkenny Carlow Homecare team & the Clancy family.  And John Mulhall’s summer camps, just finished this week, have been hugely successful.  John offers a fun filled week providing games based activities aimed at enhancing and building friendships, maximising enjoyment and sustaining involvement in Gaelic Games in the local community,” finished the Damerstown native. 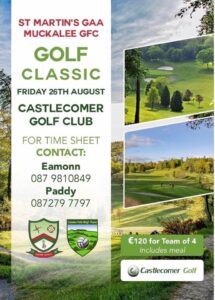