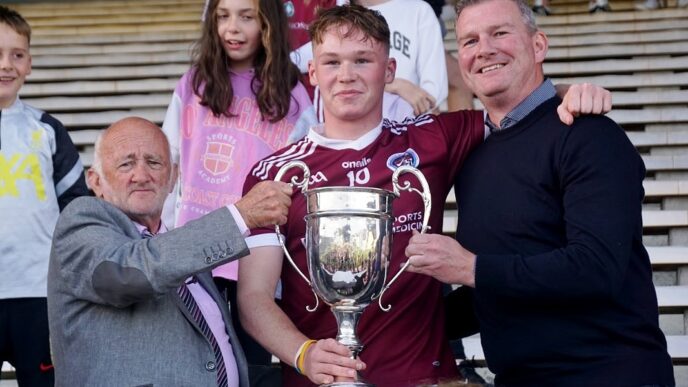 Click HERE for pictures from the finals courtesy of Willie Dempsey

James Stephens were first out of the traps with 2 points from placed balls, one 65’ and one free both hit by Stephen Manogue.  Dicksboro had a couple of chances to reply but failed to hit the target with James Stephens defending well, Noah Manogue doing well in the early exchanges. James Stephens, assisted by the wind, added two more points to race to a 0:04 v 0:00 lead, Ed McDermott pointing over his shoulder and midfielder Sean Bergin scoring from from way out the field.  From here on Dicksboro got going and this made for a cracking final between two very physical teams. Michael Stynes opened the scoring for the Champions after a great run found him some space to slot the ball over the bar. James Stephens continued to have the majority of possession in the first half and found their scores a little easier to come by, adding a free from Stephen Manogue and four points from play through Stephen Manogue, Bill McDermott and two from Ed McDermott to bring their halftime tally to 10 points. The Dicksboro men stayed in the game all through the second half, showing some great determination and drive to continue the fight. Michael Stynes added to his tally with another point and was playing well too. Dicksboro seemed to cause problems for James Stephens when they ran and carried the ball, Evan Murphy was a little unlucky not to score after a great run up the field saw him hitting the ball wide. The bit of luck did come for Dicksboro in the next passage of play when Captain Killian Dollard again ran at the James Stephens defence and blasted the ball to the back of the net. Dicksboro added another point before half time to keep them in the game.

James Stephens started the second half quickly with a point from Sean Bergin but with the wind at their backs Dicksboro found another gear and accounted for the next 4 scores (1:03), two pointed frees from Billy Fitzpatrick either side of a Ross Doyle goal and a well  deserved point from Brian Moore who was very influential from the restart.  James Stephens then had the chance of the game to restart their challenge when Ed Lauhoff caught a sideline ball and gave a great ball across the 21 to Jacob Breslin who had his shot blocked and out for a 65’ and unfortunately the 65’ went wide. Stephen Manogue did get the goal to bring his side to life again when Ed McDermott got on the end of a long ball and he found Manogue in space with a clever ball across the 21’ to make the score 2:06 v 1:11 and game on again.  This was a very good physical battle now and both teams were giving it their all displaying some  great skills and the two scores that followed were of high quality. Dicksboro full forward Billy Fitzpatrick delivered both scores, firstly a tennis style forehand when he got on the end of a high hopeful ball to finish to the back of the net and finally a point on the run from the left hand sideline 50 yards out worthy of winning any game at any level.

Goals win games and maybe Dicksboros’ ability to get one in the first half against the wind was the platform for their success in this thrilling County Final.

The opening  stages were a great indication of how the rest of this game would go as both St Lachtains and Emeralds  never gave each other an inch all over the field. The half time score was St Lachtains 1:04 v 0:08  Emeralds with the Emeralds finding their scoring chances a little easier but a goal from Conor Dalton keeping the Champions in contention.

The second half didn’t yield many scores but what a battle it was. Ten mins had passed in the second half before we had a score , a brilliant score from St Lachtains man Cathal Hickey followed by another from Jimmy Cleere. All was very tight at this stage with the Emeralds maybe edging it  ever so slightly on the field with their half back line of Conor Kavanagh, Michael Ahern and in particular Craig Barnaville doing very well. Now into extra time with the Emeralds one point up and Cathal Hickey leads the charge for St Lachtains, he carries the ball past the 45’ and past the 21’ when he is pulled down  and a last chance free to level things and go to extra time. Up steps corner forward Cian Donnelly to take the pressure free, not an easy angle it has to be said and he points to bring it to extra time.

Extra time produced a little more space for both sides as both put a few more scores on the board.  Michael Ahern opened the scoring with a point quickly followed by a Cathal Hickey point for St Lachtains. They continued to trade scores in this battle, a monster free from Jimmy Cleere(Emeralds) was added to by a point from Calum Lawlor to go two points up. The Freshford side then found a little space in the Emeralds defence and up stepped corner forward Mickey Tiernan not once but twice to bring us all square again. Mins to go and all the talk was of penalties as these teams were extremely well matched on the night but no there was time for some more scores. Emeralds again found a little space on the left wing to get another point to go one up, Freshford take the puckout but find themselves defending straight away. While piling the pressure on the Emeralds attack they are awarded a free from way out the field. Up steps captain Jerry Bergin, the sideline calls for ‘’runners’’, someone to ‘’get on the end of it’’ but Jerry takes a deep breath and points one he will remember for a long time to level things again.  The puckout is taken and St Lachtains gain possession and pacey wing forward Conor Dalton puts the winner over the bar to give St Lachtains the lead in this very late stage of the game. With the St Lachtains following now urging referee Richard Holland to blow the whistle for the final time we still have time for more drama.  Emeralds now with centre back Michael Ahern at full forward finds himself with ball in hand after a mighty catch turns and strikes at point blank range for surely what would be the winner but Michael Murphy in the St Lachtains goal somehow gets his hurl to the ball and equally does brilliantly with his second touch to get the ball to safety. All over now as Richard Holland does blow for full time and St Lachtains are one point winners in a high quality and highly enjoyable County Final.