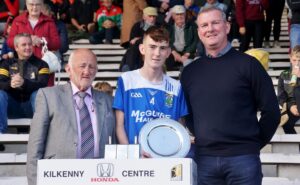 Thomastown were in devastating form as they dispatched of the Rower-Inistioge challenge in a very one sided Kilkenny Honda Centre Minor B Championship final.

Thomastown’s scores came from all angles while the Rower depended largely on the impact of Kilkenny minor star Eoghan Lyng who contributed 1-8 of his side’s winning tally.

Thomastown had the title wrapped up within the opening 10 minutes after Conor Monks and Cian Farrell netted early goals and Rower-Inistioge were chasing shadows for the rest of the game as a result and their semi-final extra-time win over St Martins seemed to take a toll on them as they failed to score from play in the opening half.

Thomastown led 2-12 to 0-3 at the break and with Farrell and Cian Doherty scoring two further goals for the winners, they eased clear on the scoreboard.

Eoghan Lyng scored a late consolation for the Rower but it proved to be nothing more than that as Thomastown won by 16 points in the end.

Thomastown had a dream start to the game and within five minutes, they were 1-2 to 0-0 ahead.

Conor Monks 4th minute goal coming either side of a brace of points from Colm Treacy.

Eoghan Lyng then got Rower-Inistioge off the amrk with a pair of quickfire frees before Treacy extended his tally with another point from play.

Thomastown’s second goal arrived a couple of minutes later when Cian Farrell netted on the back of Eanna O’Keeffe having a shot rebound off the post.

Ciaran Coone added on two further points for Donal Farrell’s men as they led 2-5 to 0-2.

That margin of lead only grew larger in the following minutes as Treacy, Farrell and Monks all knocked over points.

Lyng stalled the Thomastown momentum with his and Rower-Inistioge’s third point of the half in the 23rd minute but by that stage Thomastown led by 12, 2-9 to 0-3.

Treacy and Farrell continued their tour de force up front while another point from midfielder Rory Connellan left the winners 2-12 to 0-3 ahead at the half-time whistle.

To have any chance of getting back into the game, Rower Inistioge needed a bright start to the second period and the opposite happened when Cian Doherty found the net directly from the throw-in for Thomastown.

PJ Mackey replied with Rower-Inistioge’s opening score from play in the 32nd minute but it wasn’t long till Thomastown got their fourth goal after Cian Farrell scrambled the sliotar to the net on the back of Rower’s goalkeeper Cian Murphy making a great save from Colm Treacy.

Ciaran Coone and Lyng then swapped efforts before the Rower hit 1-2 without reply.

PJ Mackey knocked over his second point from play in the 42nd minute before Lyng then had a 21 yard free pushed past the post.

The Kilkenny minor star did regain himself to convert a 65 before he got his side’s only goal of the game to put some bit of respectability on the scoreboard.

That left Thomatsown ahead on a 4-13 to 1-7 scoreline by the halfway mark of the second period and the game rather petered out over the following 15 minutes.

Treacy and Farrell got two points apiece before the end for Thomastown while Lyng converted a trio of frees for a gallant Rower-Inistioge outfit.

It was very much Thomastown’s day though as their extra class up front told in a dominant display that saw them run out fully deserved 4-17 to 1-10 winners.

Treacy and Farrell were the star turns on the day for Thomastown as they scored 2-11 between them while Conor Monks, Cian Doherty and Ciaran Coone also put in big displays for the winners.