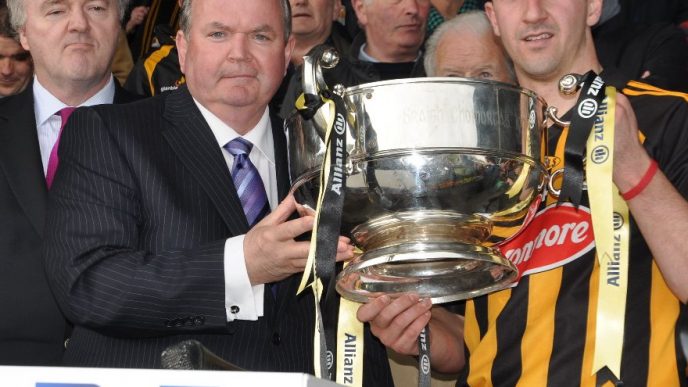 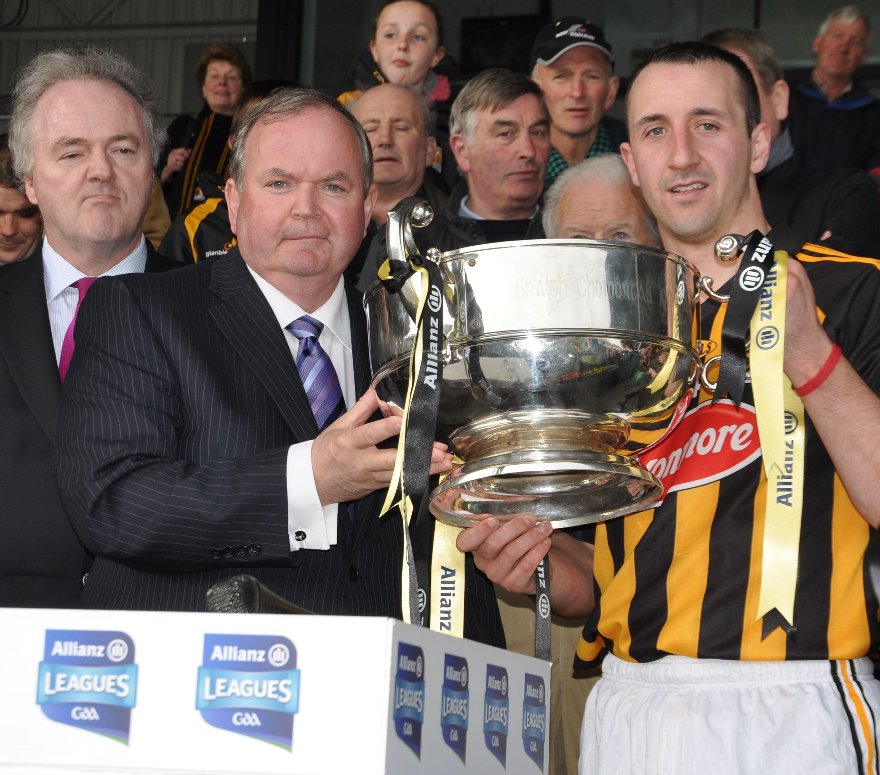 Kilkenny claimed their 15th Allianz Hurling League Division I title at Thurles this afternoon, scoring three first half goals to obliterate Cork in a one-side game.

The Cats were 1-4 to 0-0 ahead before Cork had a chance to draw breath, Eoin Larkin having plundered their opening goal after just five minutes.

Cork were in disarray in the opening stages and conceded a second goal after 10 minutes, when Colin Fennelly drilled a shot past the helpless Cork goalkeeper, Martin Coleman.

The Rebels’ full-back line was in dire straits, with Larkin giving their rookie full-back, Stephen McDonnell, serious problems. Brian Murphy was eventually moved to No. 3 after 20 minutes to take care of the Kilkenny captain but most of the damage had already been done.

Barry-Murphy’s side desperately attempted to force their way back into the game, with their stand-in captain Patrick Horgan at least hitting the target from frees, as the rest of their forward line struggled to make any inroads against a superb Kilkenny defence. Horgan had a 21-yard free saved by David Herity and again the Kilkenny ‘keeper saved smartly when Horgan attempted to catch him off guard with a long-range free on 32 minutes.

But Cork were dealt a hammer blow just before the break as TJ Reid grabbed Kilkenny’s third goal on the stroke of half-time, leaving his side 3-11 to 0-6 ahead. Again Larkin did the damage, but his shot was saved by Coleman and Reid swept home the rebound.

Cork brought Conor O’Sullivan on for the struggling McDonnell at the break, while Darren Sweetnam replaced Lorcán McLoughlin. Sweetnam was one of the few Cork players to do himself justice on the day, the Leaving Cert student scoring two points from play and bringing some much-needed aggression to the Rebels’ midfield in the second half.

Horgan and Niall McCarthy scored the opening points of the second half, but there was to be no way back for the Leesiders. Having trailed by 14 points at the break, that gap was no different at the end of the game. Horgan, who scored 0-9 (0-6f, 0-1 pen) for the Rebels, drilled a penalty over the bar in the closing stages.

Kilkenny were simply outstanding and had one of those days when everything seemed to go right for them. Their full-forward line were unplayable at times, with Colin Fennelly and Larkin scoring 1-4 apiece. In fact, every single Kilkeny midfielder and forward scored from play, whereas four of Cork’s starting forwards failed to score and more than half of their return came from Horgan.

The one sour note for their manager Brian Cody was a second half injury to Hurler of the Year Michael Fennelly, who was stretchered off after 40 minutes with what looked like a serious ankle injury. With the Cats already dealing with something of an injury crisis – Richie Power, Henry Shefflin, Noel Hickey, Michael Rice and Aidan Fogarty are all currently sidelines – ahead of their Leinster Championship campaign, the loss of their star midfielder to injury is the last thing they needed.

For Brian Cody, it was the sixth Allianz League title of his reign and surely one of the most impressive performances his great side have ever produced.

Photos from the day